Call to the Continental Meeting for Democracy and against Neoliberalism Montevideo, November 16 to 18, 2017 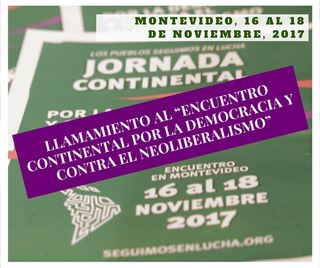 Under the slogan, “No Stepping Back! We, The People, Continue To Struggle!”, we, social movements and organizations of different expressions of popular fields in the region, have been building a process of interlinking struggles against the offensive of conservative and capitalist sectors in the continent. In 2016 we mobilized actions in dozens of countries marking our reorganization after the meeting held in November 2015 in Havana, where we convened to celebrate 10 years of the defeat of the Free Trade Area of the Americas (FTAA).

In this process, we have continued to promote our resistance and our proposals for a society structured on the principles of equality, people’s self-determination, women, workers, peasants and indigenous people’s autonomy, with social and ecological justice.

As part of the follow-up to that hemispheric journey, we are calling everyone to the “Meeting in Montevideo”, which will allow us to continue accumulating knowledge about what the region and the world are experiencing at the moment. We want to deepen our analysis about the way in which the logic of capital appropriates people’s lives and environmental goods. The way in which large corporations and major powers benefit from the concentration of wealth and the exploitation of the majority and the way in which these powers are combined to attack democracy and people’s sovereignty.

We will meet to share our experiences and learn from the struggles in which we are engaged in our various territories against the commodification of life and our resistance against transnational corporations. Affirming democracy and the people’s integration as our answers in the work place, in our communities and in the different spaces where women and men are strengthened in their effort to build organisations led by peoples and nations based on justice, inclusion, tolerance and respect.

The “Continental Journey for Democracy and against Neoliberalism”, as a process under construction, will meet in Montevideo to deepen our shared visions, to join new voices and expand the diverse protagonists we represent. Solidarity and internationalism will mark our actions and alliances as peoples of the Americas and the world.

We have no doubt that after the meeting there will be many steps in our construction towards a political entity that will undertake more and more continental struggles and mobilizations.

Come to Montevideo; Uruguayan social movements and people of Montevideo invite us to celebrate our victories, and to unite and mobilise to build our resistance against the offensive of conservative and capitalist sectors in the continent.

“No Stepping Back! We, The People, Continue To Struggle!”