Continental Convergence for Democracy and Against Neoliberalism Montevideo, November 16 to 18, 2017 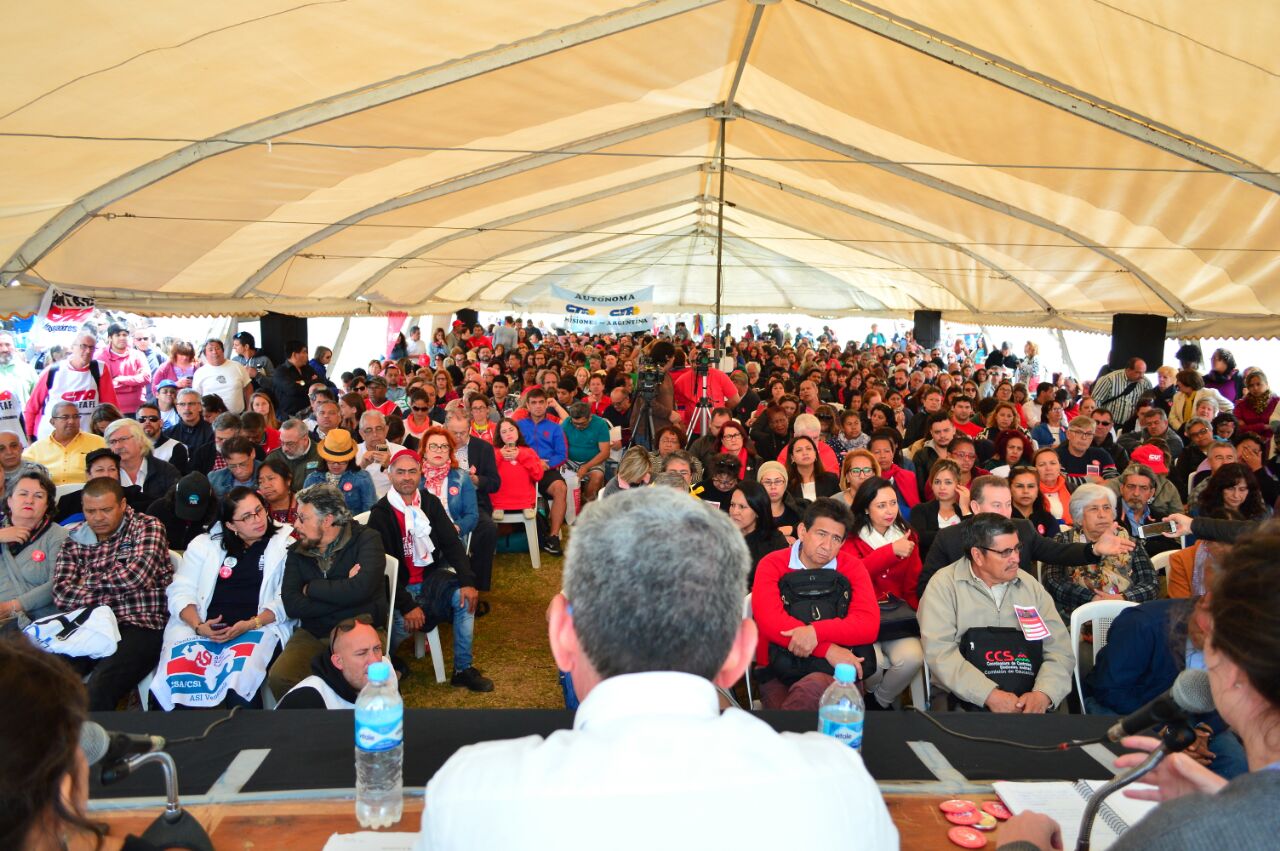 1. The movements, social organizations and diverse expressions of the grassroots field of the Americas, heirs and protagonists of the struggles against imperialism and the military regimes in Latin America and the Caribbean, that rise up against the neocolonial agenda of free trade, privatization, looting and poverty represented in the defeated FTAA project, reaffirm the principles of solidarity and internationalism that unite us, as well as the commitment to continue fighting for a systemic transformation against capitalism, patriarchy, colonialism and racism.

2. Gathered in the Continental Meeting for Democracy and Against Neoliberalism, held in Montevideo, Uruguay, from November 16 to 18, after the intense exchange of experiences and struggles, we ratify the unifying agenda and articulation of social and political forces that we agreed on at the Havana Meeting in November 2015. We reaffirm the need to re-articulate the various grassroots alternatives and grassroots initiatives to face the neoliberal capitalist model of domination.

3. The advance of Capital over the peoples and their territories shows us that capitalism, racism and patriarchy form an intertwined model of multiple dominations. The new offensive of neoliberal forces deepens the same mechanisms of land grabbing, looting of common goods, exploitation of work and control of bodies. The rates of profit are guaranteed by adjustments that are based on more work without rights and overload of unpaid work by women, which guarantee that life is sustained in the context of accelerated precarization of their living conditions. The Transnational Corporations (TNCs), and the associated national elites, are the main beneficiaries of the neoliberal globalization model. The architecture of this domination is expressed in the free trade and investment treaties of new and old generation whose guarantor is, among others, the World Trade Organization (WTO).

4. In turn, the system of perpetual indebtedness is a mechanism of domination, conditioning the productive model and expropriation of public resources and collective goods, while deepening the profits of local elites, increasingly corrupt and dependent on the international financial system.

5. That same alliance is the one that sharpens the dispute between the process of permanent accumulation of capital and the processes of sustainability of life, generating an explosion of socio-environmental conflicts in the region, facilitating land grabbing and the displacement of large masses of peasants and indigenous peoples, creating a migratory, environmental and food crisis. By deepening the processes of financialization of the economy and nature, the national bases and the sovereign competences of states to develop public environmental and labor policies in favor of the peoples are being destroyed.

6. The institutions of formal democracy and the exercise of human rights have become an obstacle to this dynamic of capital. That explains the reduction of the spaces of democracy, the disregard of the popular will, the criminalization and judicialization of politics, whose culminating expression, among others, has been the parliamentary, legal and media coup against President Dilma Rousseff and the pretension of preventing the candidacy of former President Lula da Silva in Brazil.

7. The process of monopolization, concentration and control of information and technology by media corporations, with ramifications towards other branches of the economy, is an attack on the foundations of democracy. Given that in a globalized world who controls and distributes information has power even over the political powers and grassroots sovereignty.

8. The continental right seeks to advance the precariousness of labor relations and the elimination of collective bargaining, the deregulation of those contained in the Brazilian and Argentine reforms, as well as the offensive of the Uruguayan employers against collective bargaining in the ILO, are clear examples of that strategy.

9. This new conservative and reactionary advance reinforces hate and misogyny discourses concretized in racist and discriminatory practices against people of African descent, native peoples, migrants and the young population of the popular sectors. Control over bodies and sexuality is imposed with femicides, criminalization of abortion, violence against women and the LGBTI population. The xenophobic, racist and criminalization policies against migrants that have settled in the political discourse in the US and the European Union are dangerously imitated by the fascist right of Latin America and the Caribbean.

10. To this must be added the attack on human rights, the criminalization of grassroots movements, the murder and the disappearance of social leaders. The impunity of yesterday’s state terrorism becomes the founding basis of today’s impunity for big capital.

11. As part of that advance, the US government seeks to strengthen its imperial influence in the region and deploys a policy of open interventionism that, using all diplomatic, cultural, economic and military devices, attacks the sovereignty of the countries of the region. The strategy of militarization through the expansion of military bases and the presence of troops with “humanitarian” exercises hide the pretension of territorial control over the strategic commons of the region. The permanence of foreign security forces in Haiti, as part of the new mission of the UN, United Nations Mission for Justice Support in Haiti (MINUJUSTH), continues the occupation of that people and responds to this same logic.

12. This imperial strategy is condensed in the multidimensional war against Venezuela, which has moments of paramilitary violence, economic blockade, financial asphyxia, international sanctions, media criminalization and diplomatic isolation.

13. The serious breach of the Havana agreements that puts the peace process in Colombia in serious danger and deepens the violence in the occupation of territories by paramilitary forces, with the resurgence of the murders of popular social leaders. At the same time, the process of dialogue with the ELN is stalled by the government, which at the same time ignores the participation of the agrarian, peasant and Afro-descendant sectors in this process.

15. The new regional institutions promoted in recent years are also threatened, such as UNASUR and CELAC, which, even with deficits in their content and participation, constitute important efforts towards an integration that is not subordinated to US policy towards the region. We also denounce the setbacks that affect the Mercosur process and redirect it to the agenda of neoliberalism.

16. Claiming the important social and political achievements of the grassroots governments in recent years, we recognize the limitations we face in these processes, especially the lack of recognition of the importance of organized social mobilization to advance this transformation and overcome the predatory logic of the capitalist system.

17. From Montevideo and under the enriching influence of having shared the different experiences of struggle and resistance and creativity, of communities, groups and organizations that construct different forms of confrontation to the power of capital and of solidarity alternatives from and for the peoples, we ratify our commitment to the Continental Conference for Democracy and Against Neoliberalism, as a broad, diverse, plural and unifying process and a space for articulating the resistances and alternatives of our peoples.

18. It is essential to reinforce the political action of mobilization, organization and struggle from the popular forces to build true democracies and to promote a political project of transformation of popular character in Latin America and the Caribbean. There cannot be democracy without participation, without distribution of wealth, without access to information and justice.

19. We will continue fighting for the integration of our peoples and nations, claiming our cultural, social, political and economic diversity, placing the rights of peoples at the center.

20. We will face the reactionary offensive, affirming the free movement of people and the recognition of universal citizenship.

21. We will assume the non-negotiable defense of the autonomy and freedom of women, the struggle to put an end to femicide and all sexist violence, we also affirm the right to legal, public and safe abortion.

22. We will confront the transnational corporations and their strategies of capture and submission of democratic institutions, promoting concrete actions to reduce the space they have to evade and avoid their responsibilities.

23. We will mobilize to establish national and international instruments that prevent the rights of companies to have primacy over human rights and peoples, participating in the process for the adoption of an Internationally Binding Treaty on Transnational Corporations and Human Rights.

24. We will promote a popular integration that respects the diversity of our cultures. That is built from the protagonistic participation of our peoples. That defends peace and self-determination in our territories, free of military bases and interventionism, with complementary economies and relations of solidarity and cooperation.

25. We will continue to demand the integral and popular agrarian reform, as a process that guarantees peasants access to land, water and territory as well as the protection of native seed and ancestral knowledge, thus promoting the development of food sovereignty and agro-ecology to feed our peoples.

26. We will continue promoting the articulation of our alternative and popular media under a coordinated communication strategy and we will also sustain the struggle for the democratization of communication in each of our countries as a way to limit the media power in the region. We will face the power of the transnationals defending free internet and free technologies.

27. We will maintain our solidarity with the people of Venezuela and their sovereign right to develop their social, political and economic project without aggression or interference, with a guarantee of peace and respect for their institutions.

28. From Montevideo, we summon all the social actors that are not part of the Convergence and the political forces of the continent to build a together a strategy that allows us to strengthen the popular mobilization and the struggles in the region.

29. This path of unity is a condition for transcending the dominant economic frameworks and proposing other ways of organizing social, productive and reproductive relationships that, based on equality, solidarity and social and environmental justice, build the food and energy sovereignty of our peoples and the dignified life in our territories.

In such sense we are summoned to:

1. Mobilize to repudiate the WTO Ministerial Summit in Buenos Aires in December 2017.

2. Unifying mobilization of all movements on March 8th

3. Be present and place our agenda against free trade and transnationals in the Alternative World Water Forum (FAMA), Brasilia, March.

4. Unifying mobilization of all movements on May 1st.

5. Mobilize to denounce the Summit of the Americas in Lima, in June 2018, as a scenario in which it intends to reinstate the agenda of neocolonial and imperialist domination in the continent.

6. Organize our unifying action around the G20 Summit in Argentina, second half of 2018.

7. Finally, we call on all the peoples of the continent to mobilize in a unified, combative and supportive manner in all our countries the week of November 19th to 25th, vindicating the agenda agreed at the Montevideo Meeting, as an expression of the action of our peoples in Defense of Democracy and Against Neoliberalism.

Continental Convergence for Democracy and Against Neoliberalism, November 18, 2017, Montevideo, Uruguay